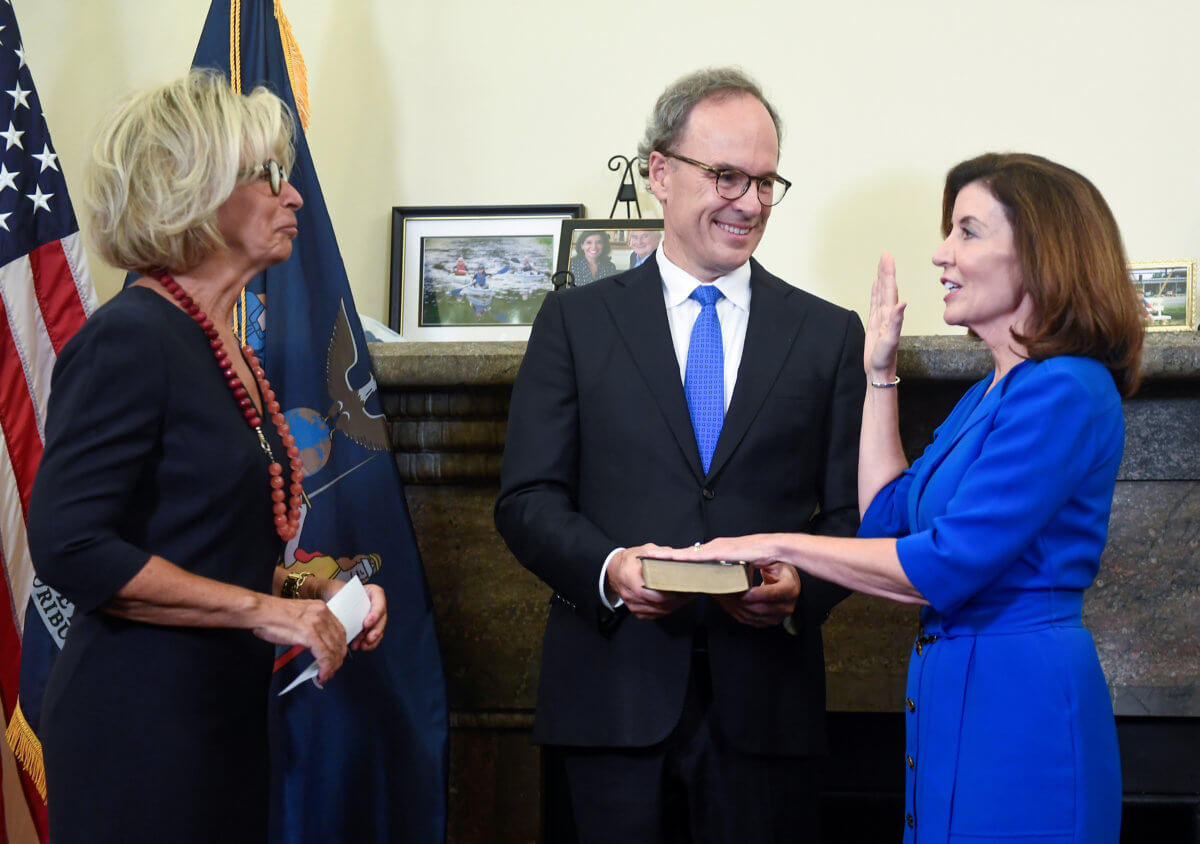 Chief Judge Janet DiFiore swore Governor Kathy Hochul into office just over a year ago, and now Hochul will choose her successor after the leader of the statewide court system announced she will step down next month. (Courtesy of governor’s office)

State Senator Michael Gianaris, the upper chamber’s second-highest-ranking leader, is hoping Governor Kathy Hochul makes the proper course correction in choosing a successor as the new chief judge of the New York Court of Appeals after Judge Janet DiFiore announced she will step down in August.

As the Senate deputy leader, Gianaris will do all he can to make sure the next chief judge will follow through with the state Legislature’s progressive movement.

“Janet DiFiore’s resignation allows for a necessary recalibration of our state’s highest court after a series of wrong-headed decisions by her four-judge majority bloc has skewed the playing field in favor of employers who run unsafe workplaces, out-of-state corporations and law enforcement personnel who abuse their power,” Gianaris said. “I encourage Governor Hochul to choose a nominee who better reflects the values of our state and look forward to a more robust confirmation process to ensure that happens.”

“Because the court has drifted to a place that’s not really representing the values of our state. It has become a court, thanks to the four members that have stuck together, this majority block that has been ruling in favor of the most powerful against the interests of those who need government on their side,” Gianaris said. “These are all things that are not in keeping with the direction this state has been going. It’s the reason we [Democrats] have supermajorities in both houses that have been driving this progressive direction for our state and the court has been an outlier. What we don’t want is to have our own version of the U.S. Supreme Court here in New York. Now we have an opportunity to fix that here in New York.”

Gianaris blames DiFiore for striking down the redistricting maps that threw the primary elections into chaos last month. While Congressman Hakeem Jeffries blamed DiFiore for single-handedly aiding and abetting Republican attacks on the redistricting process in New York, putting out a two-word statement when she announced she was stepping down.

Gianaris led the redistricting effort that was tossed out by DiFiore’s court causing the split primary that resulted in low voter turnout for the governor’s race and for the state Assembly last month. The primary for Congressional districts and Senate seats are expected to have low voter turnout next month.

“We came up with the lines that complied explicitly with all the requirements in statute and in the Constitution,” Gianaris said. “And the court went haywire.”

Governor Hochul has said she will review the recommendation of the Commission on Judicial Nominations as she works to appoint new leadership for the statewide court system. Gianaris hopes it’s someone that can lead through fairness, especially when it comes to redistricting.

“It’s unfortunate, but we’re living with the consequences of it rolling forward,” Gianaris explained. “The next redistricting is of course a decade away so we have the opportunity now to do it right and put something on the ballot that New Yorkers deserve. If this is allowed to exist in perpetuity then it will happen every 10 years because it will be either the Democratic appointees or the Republican appointee’s interest to have the court do, instead of allowing the legislature to have the final say which is what the Constitution provides. So there will be a guaranteed deadlock at the commission level every 10 years unless we change the process.”