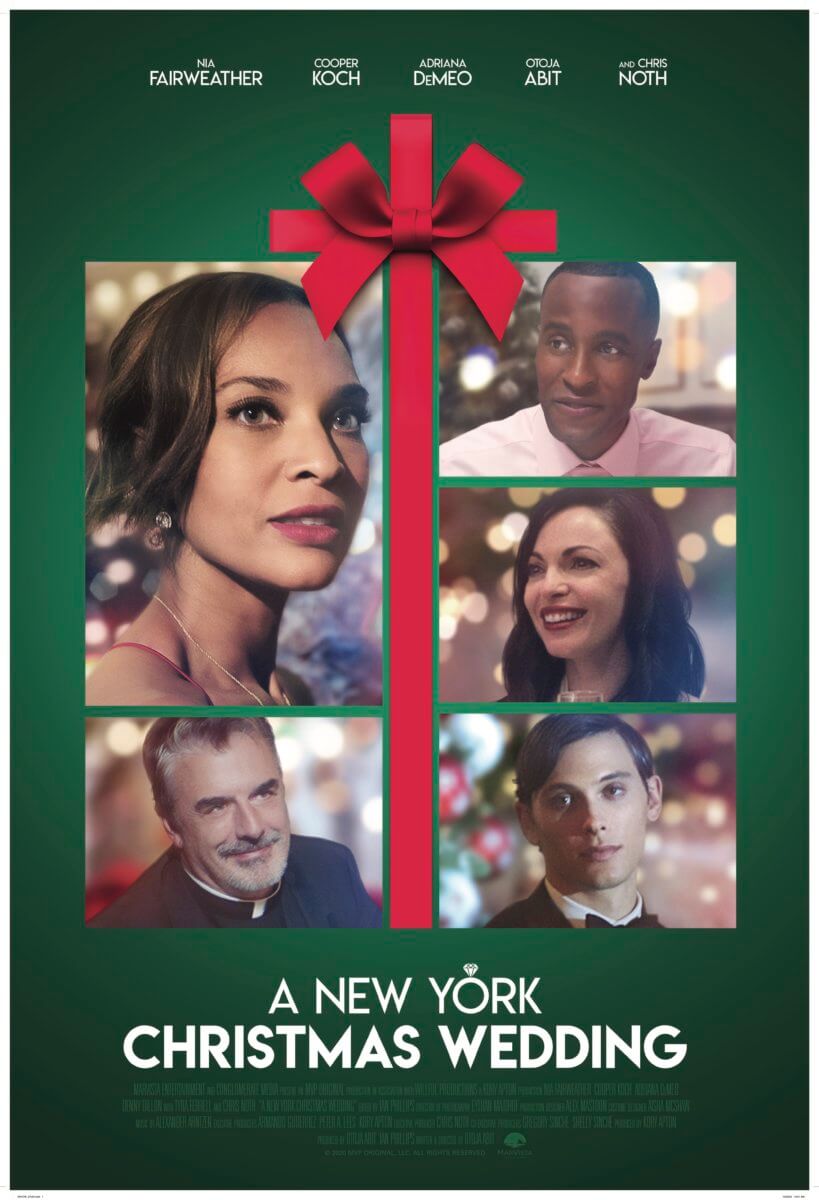 On the surface, “A New York Christmas Wedding,” may seem like your classic Hallmark Christmas movie — it begins with some shots of pre-COVID-19 Manhattan, a voice over about love and Christmas bells — but the story is a bit more nuanced, and it’s not just because it takes place in Queens.

“So let me take you out to Queens, ’cause this one’s personal, and it happens to be my favorite,” are some of the words that introduce the story, later cutting to a formative moment in the life of the protagonist, Jennifer (young version played by Camilla Harden) where she fails to tell her best friend, Gabrielle (young version played by Natasha Goodman), her true feelings for her. We’re then introduced to present-day Jennifer (Nia Fairweather) who is struggling to find herself in Manhattan and is engaged to the well-off and kind David (played by Otoja Abit).

But when Jennifer gets a visit from an angel, he helps her see what life could have been like back in Queens with her first love.

Abit, who directed, wrote and acted in “A New York Christmas Wedding,” said he wasn’t looking to write a movie to represent the LGBTQ community, he just wanted to write about love and acceptance.

The story and filmmaking process was personal to him, which explains his subtle yet intentional homages to Queens (in one scene, Abit’s character points out how it only takes about 30 minutes to cross the bridge from Manhattan to get there) as well as certain aspects of his upbringing, such as Catholicism.

“Coming from an immigrant home, you see the world for what it is,” said Abit. “Being Catholic, I’m always amazed how people tell me they stepped away from church because they felt welcomed but not equal. I haven’t personally had that experience, but I thought, ‘what would it feel like to have church turn your back on you, what would it feel like to have your family turn their back on you?'”

Abit is the son of Nigerian immigrants, and grew up in Briarwood. He attended Archbishop Molloy High School and St. John’s University, where he played division one basketball and earned degrees in Communications, Theatre Studies and a Business minor.

“It’s kind of a homecoming,” said Abit, who now lives in Manhattan. “Queens is such a melting pot, but when I moved to Manhattan, people weren’t aware about how important it is. People come form everywhere to get to Manhattan. And a boy from Queens moving to Manhattan is a big thing.”

Abit said they shot most of the movie in Middle Village, on Queens Boulevard and in Woodhaven, in addition to filming some scenes at St. John’s University’s Jamaica campus.

“You gotta bring what you know,” he said. “For me, there’s no better way to show a middle class family living well. You didn’t feel bad for them, they just lived normal lives, and there’s this sense of home and community.”

“A New York in Christmas” marks Abit’s first feature film. After writing, directing and starring in his well received short film, “Jitters,” in 2018, Conglomerate Media decided to take a risk on him and his production company, Wilful Productions.

Abit was joined by Chris Noth, who many may remember as Big from the widely popular “Sex and the City” series, in both of his films. Noth not only executive produced “A New York Christmas Wedding,” he also played a priest trying to bridge traditions and modern-day life.

“If anything is set in New York City you have to have Chris Noth,” Abit laughed, adding that they first met while working on a Broadway play. “He became a big brother to me.”

Abit acknowledges his LGBTQ storyline already helps the movie standout in the Christmas movie genre, as very few movies portray same-sex marriage or couples, but it also serves as a model for what a diverse cast can look like.

“We grew up watching a lot of Hallmark and other Christmas movies, and we never saw ourselves in them,” said Abit. “When they said to make a Christmas film, you can get caught up and enjoy looking at love during Christmas and the good feelings, and we wanted to go in that direction but we wanted to make something more interesting. We get films like this when more people can tell their stories. We’re not going to wait for Hollywood to do it, we’re doing it ourselves.”