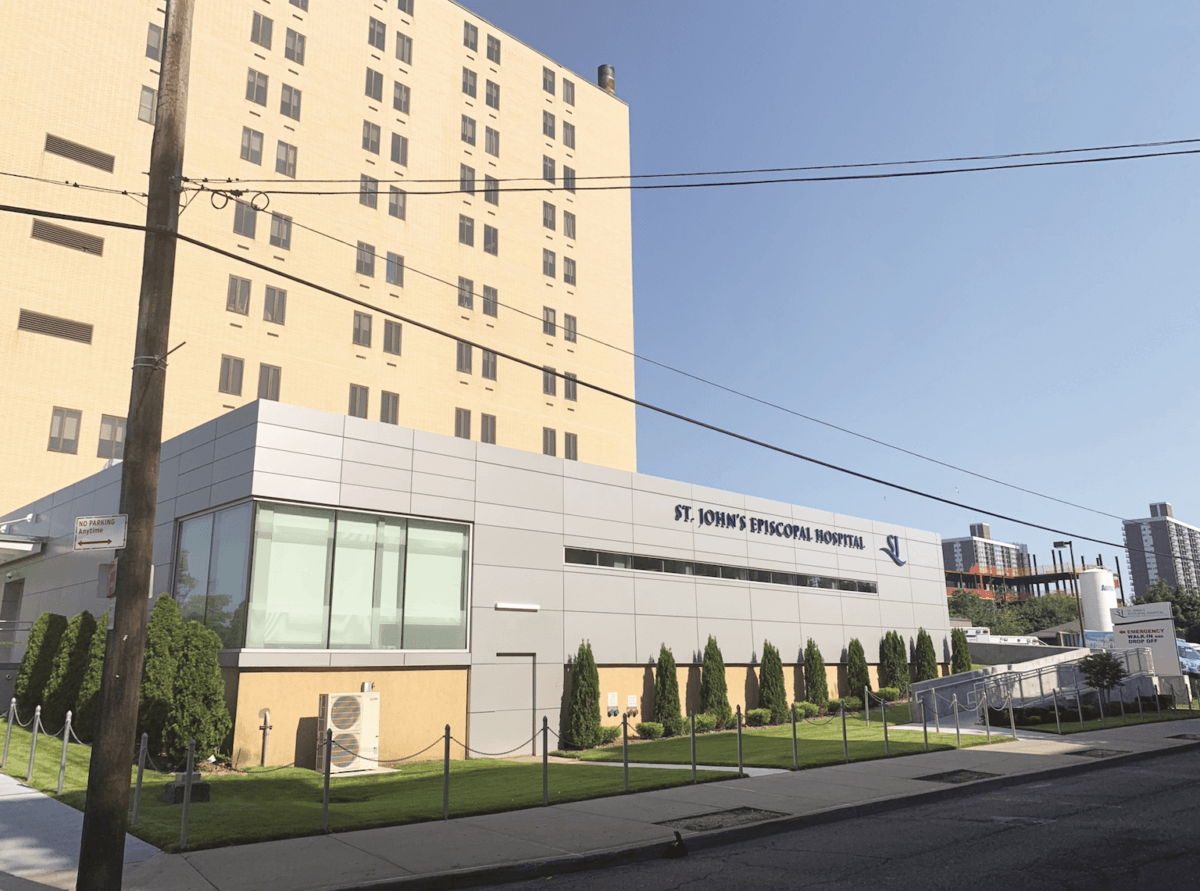 Mayor Eric Adams is planning to bring a new healthcare facility to Far Rockaway, where St. John’s Episcopal is currently the only hospital among smaller healthcare clinics on the peninsula. (Photo courtesy of SJEH)

Nearly a year after St. John’s Episcopal Hospital (SJEH) identified the first COVID-19 case in Queens and saw its emergency room flooded with sick people, the state now wants to impose drastic cuts to the hospital’s capacity and services that would endanger the Rockaway area.

Last week, the New York State Department of Health (NYSDOH) informed SJEH — the only hospital in the Rockaway peninsula, serving more than 13,000 residents per year — that it wants it to become a “micro hospital.” That would mean the hospital would need to reduce its capacity from 250 beds to just 15 beds; close specialty services like pediatrics and labor and delivery; and eliminate more than 1,000 jobs, according to information shared with QNS.

The proposal comes even after the Far Rockaway ZIP code 11691 experienced the second-highest number of COVID-19 deaths in New York City.

Reverend Lawrence C. Provenzano, who chairs the SJEH board, said the hospital is “deeply saddened and concerned” by NYSDOH’s push to significantly cut the hospital’s healthcare services, especially now following the health disparities the peninsula suffered, during the COVID-19 pandemic.

“The Department of Health is abandoning any consideration of the documented community health needs of this [overwhelmingly] underserved population,” Provenzano stated.

SJEH is a privately run safety net hospital, and receives most of its funding from the state and federal government in order to provide healthcare to residents who may not be able to afford it otherwise. It mainly serves Black and Latinx residents — communities that have been historically underserved.

Plans to implement a “financial sustainability process,” or ways to reduce the amount of funding the hospital receives from NYSDOH, have been ongoing since 2018.

In 2019, NYSDOH hired the consulting firm ToneyKorf Partners, LLC, to find cost-cutting measures for SJEH. As part of the consulting firm’s plans, the hospital implemented a $24 million cost savings plan, of which $15 million came from cost reductions including management layoffs at the beginning of 2020.

As the financial proceedings continued, SJEH informed NYSDOH that more cuts in services and staff could not be made. The hospital even performed a Community Health Needs Assessment with an outside consulting firm, indicating the need for more access to healthcare services in the immediate community.

But NYSDOH wanted to further reduce the state’s funding to SJEH by an additional 20 percent, according to information shared with QNS.

The first option would require the hospital to become a 15-bed “micro-hospital,” which would mainly focus on behavioral and mental health services. The option would only employ a little over 600 staff members, a significant reduction of the hospital’s current 1,700 employees. This option is the state’s preferred route, according to information shared with QNS.

Another option would require the hospital to reduce the number of beds from 257 to 91 and eliminate obstetrics, newborn and pediatric services.

The other option would require the hospital to become a 30-bed “healthplex” that only employs nearly 340 staff members.

Each option would require patients who need to be hospitalized to be transferred to a nearby hospital, as urgent care beds would be limited. One of the closest hospitals is Mount Sinai South Nassau, a 30- to 45-minute car drive from SJEH.

The plans would be implemented for fiscal year 2022, which begins in April.

In a statement to QNS, NYSDOH Spokesperson Erin Silk said that for years, the state has been working with SJEH management to achieve improved health outcomes and access in Far Rockaway. Silk said SJEH entered into an agreement with Mount Sinai South Nassau to “jointly explore how they could achieve” that objective, which included Mount Sinai’s selection of ToneyKorf to develop strategic options.

“The Department has not required SJEH to implement any of these models, and the Board of SJEH would have to grant approval to do so,” Silk said.

“The Department looks forward to working with the leadership of St. John’s Episcopal, together with the workers, elected officials and other stakeholders, in reviewing these options, among others, to find a solution that will work for all parties,” Silk said. “In the meantime, the State is continuing to provide substantial operating support to St. John’s Episcopal.”

‘Where are they going to go?’

Dr. Teddy Lee, chairman of SJEH’s emergency department, said he doesn’t see the logic behind any of the options.

Lee recalled their ER being 200 percent over capacity at the height of the pandemic almost a year ago, with their hallways and even their waiting areas doubled up to treat patients.

“At the same time, we would usually have at least 10 to 15 ambulances, with stretchers waiting out the door almost to the parking lot,” Lee said. “And those times, our staff would go out and literally pick out a person who’s the sickest, and bring them in, and we treat them that way.”

Last May, The New York Times showcased the harrowing way healthcare workers treated patients and had to employ refrigerated trucks as their morgue averaged 17 to 18 bodies a day.

Lee said that while things are under control now, their emergency room alone averages about 48,000 visits per year, pre-pandemic. During the pandemic, they weren’t able to transfer patients to other facilities. He doesn’t believe other facilities will be able to handle added volumes.

“It’s just not like our community is pretty well off; it’s mostly a very underserved area, and that’s why they need the most care,” Lee said. “If you close or cut the service in this area, where are they going to go?”

Community leaders and elected officials have expressed deep disappointment and outrage with the proposals backed by the state.

Assemblyman Khaleel Anderson said the plans are “wholly unacceptable and completely insulting to the communities surrounding the hospital that are still reeling from the pandemic and already face tremendous healthcare insecurity.”

“We need expansion, not further reduction. St. John’s already does not have a high-level trauma center, which further harms victims of violence in our community as first responders are forced to travel to Jamaica or Nassau County for trauma care,” Anderson told QNS. “Slashing beds from the peninsula’s only hospital during a pandemic is like cutting off the oxygen supply to a person who is drowning. This is systemic medical racism impacting Black and Brown communities in the Rockaways, plain and simple, and my colleagues and I will not stand for it.”

Queens has the lowest number of beds per capita in the city, averaging one bed per 1,000 people.

Borough President Donovan Richards recalled fighting to save the Peninsula Hospital in Far Rockaway before it closed in 2012; and, a year later, fighting again for SJEH to be fairly funded.

“What is a micro hospital?” Richards told QNS. “This makes no sense. Whoever came up with this should shred it and throw it in the garbage. We’re putting on our marching shoes, just as we did in 2013. We’re not taking this lying down. We’re going to stand up for healthcare workers and communities of the Rockaways.”

He added the proposed cuts to labor and delivery units are particularly “ridiculous,” as the borough president’s office recently made a $7 million commitment to help expand it.

“Is this the way the state treats its healthcare heroes?” Richards asked.

1199SEIU Senior Executive Vice President for Downstate Health Systems Veronica Turner-Biggs said their union members at SJEH “have dedicated themselves selflessly throughout the pandemic to meet the many needs of the peninsula’s residents and our union has fought to make sure that local healthcare services are preserved and expanded.”

“This proposal must be immediately withdrawn and the State Department of Health must meaningfully engage with stakeholders to create a path forward,” Turner-Biggs said.

“This plan is completely inconsistent with any messaging from the NYSDOH about equity and justice in healthcare for historically underserved Black and Brown communities, and we will not allow this to go forward,” Amato stated.

Community leaders also argue that doing away with their only hospital goes against the city and state’s investments toward revitalizing the Rockaways and encouraging more development.

“To downsize the hospital will only enhance the racial disparities that run rampant in our health care system, and not better serve the community,” Meeks stated.

Florence Ferguson, a longtime Far Rockaway resident and co-chair of SJEH’s community advisory committee, said the proposals are an “insult to the peninsula” and the new SJEH administration that has worked to expand much-needed services at the hospital.

“The fact that we’re having the discussion is incredulous,” Ferguson told QNS. “What we’re saying is find another way. The funding is there. What they’re asking the community is to pay for their number-crunching with their lives. I think we’ve already paid the price.”

Rev. Dr. Les Mullings, the founder and CEO of Challenge Preparatory Charter School in Far Rockaway, called on every Queens elected official to call out the plans.

“I can’t really fathom why anybody would even remotely consider cutting services of any kind, specifically of healthcare, at this time,” Mullings told QNS. “Any attempt to cut services to SJEH is a senseless, blatant disregard to the health and wellness of the Rockaway community.”

Editor’s note: This story was updated at 6:30 p.m. with comment from the New York State Department of Health.