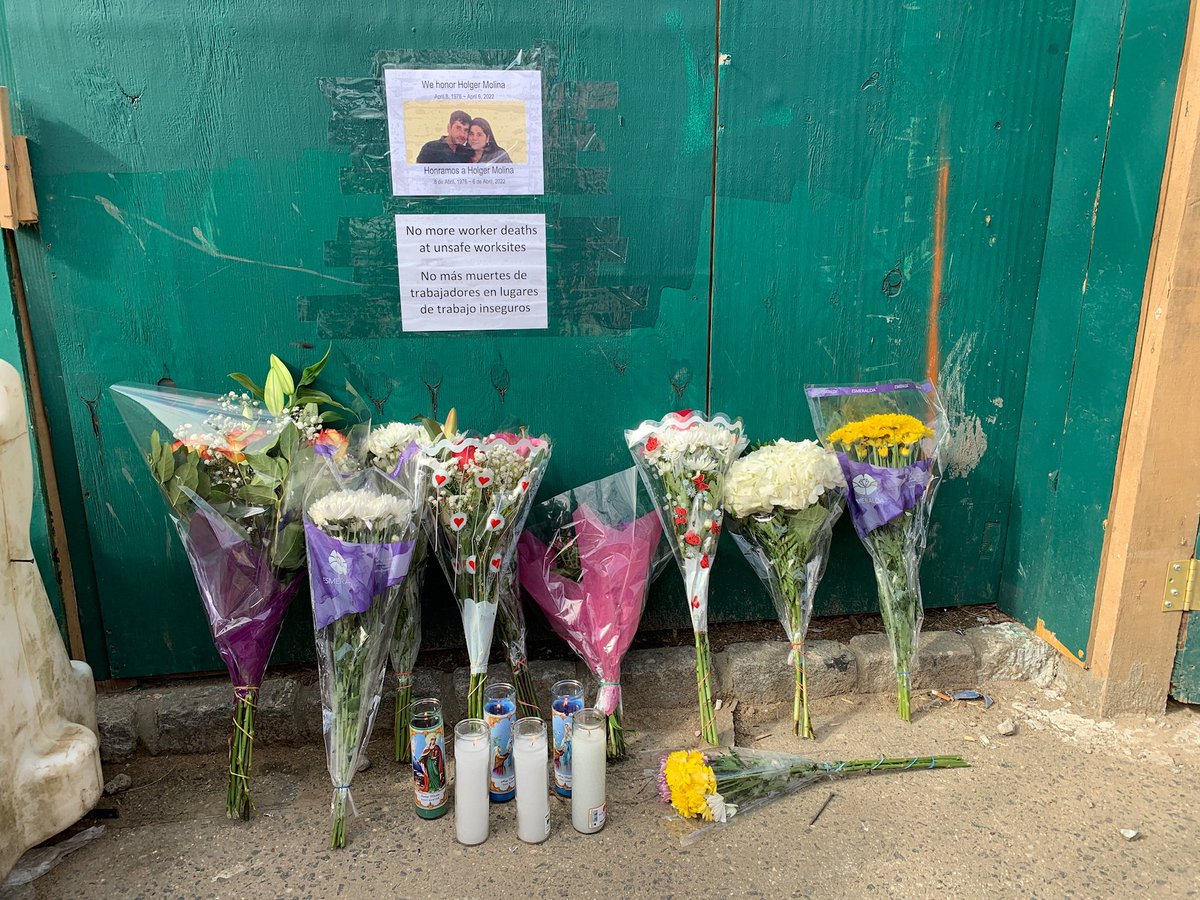 State Senator Jessica Ramos, local leaders and nearly 40 community members gathered to call on the Department of Buildings (DOB) to completely revoke the construction permit for the Ridgewood Tower development at 3-50 St. Nicholas Ave. after a worker fatally fell down an elevator shaft earlier this month.

On April 6, Holger Molino, 45, slipped on a beam while moving a board of plywood when he fell down an approximately 20-foot hole into the basement below. He was immediately transported to Wyckoff Hospital where he was pronounced dead shortly after.

In the months leading up to this fatal incident, DOB issued a total of eight violations regarding safety conditions at the Ridgewood construction site. These violations could total thousands of dollars in fines for the developer, AB Capstone, pending an Office of Administrative Trials and Hearings investigation.

One violation issued in March cited a “failure to institute/maintain safety measures resulting in worker injury due to inadequate housekeeping at time of inspection.”

DOB revealed in an email to local leaders that an inspector reported there were no safety measures in place to safeguard workers from a potential fall.

The DOB issued a full stop work order after the death of Molino in early April and will not lift it until the construction site is deemed safe for workers. DOB has said that they will be conducting random bi-weekly inspections to ensure safety standards are met.

However, Ramos and local leaders are not satisfied with this outcome, demanding the DOB completely halt the construction and turn the property over to the community.

“It frustrates me so much that the real estate industry in this city, in this state, continuously sees Latinos as disposable,” Ramos said. “As if we only exist to make them rich.”

“Last week’s tragic construction-related death is completely unacceptable, and we are actively looking into the circumstances surrounding this fatality,” DOB spokesperson Andrew Rudansky said. “Directly following the fatal fall, we issued a full stop work order at the site and launched a comprehensive investigation along with our partners in law enforcement. We are aware of the concerns of the rally organizers, and have agreed to meet with them to discuss these concerns further.”

The Ridgewood Tenants Union (RTU), a local advocacy group leading this fight, also wants the DOB to hold a public meeting on the steps taken to enforce workplace safety before any new construction permits are approved — although the group hopes there won’t be.

“There are way too many bad developers,” Ramos said. “If the DOB is listening, we need you to stop AB Capstone. Stop this project. Stop any project where workers are getting hurt and take our safety seriously.”

RTU leader, Raquel Namuche, also called on the DOB to increase fines for negligent construction employers, whose unsafe practices cause deaths. Ultimately, the group is hoping the building will be transferred over to community control.

I’m tired of developers treating workers in my community as disposable. AB Capstone cannot continue to prey on workers & tenants for their own bottom line. Thank you @RidgewdTenantsU, @NYCOSH & @NICE4Workers for bringing us all together to bring a check on predatory developers. pic.twitter.com/pcbHB3s41S

“We don’t just want AB Capstone to get their permit revoked; we want this land,” Namuche said. “And we’re going to fight for that, for Holger and his family.”

The family of Molino sent the community leaders a statement in support of their movement to shut down construction.

“The family is totally devastated,” the statement said. “You don’t know how hard these children cry for their father. There are no words to describe how much they need their father. We need justice, not only for Holger, but for every worker and for Latino workers who do not have enough protections.”

The family revealed that they have not heard from the development company, AB Capstone, or anyone involved with the site.

“We have not received one call from the company,” read the statement on behalf of the family. “Not even to ask if we are OK or if we need anything. Not even Holger’s boss called to say ‘I’m sorry.’”

If construction resumes, the building is set to stand 17 stories high, making it the tallest in the area. The mixed-use building would be used for retail and residential spaces.

Ted Renz, the executive director of the Myrtle Avenue Business Improvement District, said that this accident was a tragedy.

“We are deeply saddened by this tragic accident and loss of life at this construction site,” Renz said. “This is a major development in the Myrtle Avenue Business Improvement District that will bring major retail and new housing opportunities to the community. There are commitments from Burlington and Target that will go into that site. We can only wait for the final decision after the investigation will play out.”

Ridgewood resident Josephine Gurch said that the development never fit into the community in the first place and needs to be stopped.

“This project by AB Capstone is not what the community needs,” Gurch said. “Obviously, if there are people dying on the worksite that is an egregious form of violence against the community. And the people who live here won’t even be able to live in the tower because it’s so expensive. So, what good does it really do?”

Gurch said that she would like to see some form of public space or services for vulnerable people offered at this site.

AB Capstone did not respond to QNS for comment before deadline.