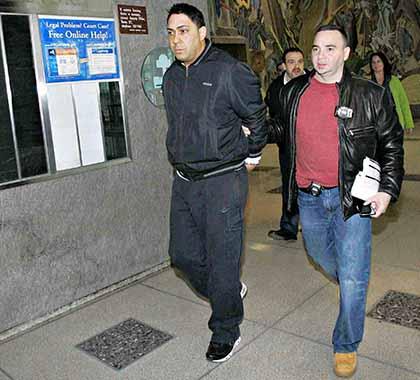 Michael Palmaccio, the alleged ringleader of a sports gambling ring, is escorted into a Queens County courtroom by police. Photo by Ellis Kaplan

One man from Maspeth, two from Howard Beach and another from Long Island were charged last week with running an illegal gambling ring that netted more than $8 million over a two-year period, said the Queens DA.

The suspects were arraigned April 6 and, according to the Queens district attorney, took bets on sporting events, lent money at high interest rates and then collected those debts at any cost.

“Illegal gambling is not a victimless crime,” Richard Brown, the Queens district attorney, said in a statement. “Those who participate in these criminal operations often use threats, intimidation and even physical force to collect debts.”

Michael Palmaccio, 39, of 91st Street in Howard Beach, allegedly oversaw those debts as the leader of the operation, the DA said.

He was the bookmaker, according to the DA, and oversaw both the gambling and loan sharking sides of the operation.

Palmaccio used an offshore gambling web site, arrowaction.net, to manage the accounts of his clients, the DA said.

The other three suspects allegedly worked under Palmaccio in various tasks, the DA said.

Gerry Gullotti, 45, of Oceanside, L.I., helped Palmaccio with the loans, the DA said, often using intimidation and threats to collect money from those who did not pay up in a timely manner.

Cono Natale, 46, of 69th Street in Maspeth, was in charge of recruiting bettors and also managing accounts, according to the DA, while Ronald Salerno, 33, of 85th Street in Howard Beach collected and distributed money from borrowers and bettors.

The arrests come less than two months after seven other Queens men were arrested as part of a separate $1 million-per-year sports betting operation based in Ridgewood. In each case, the DA’s Organized Crime and Rackets Bureau brought down the gambling rings after several years of investigations.

“Today’s indictment will send a clear signal that when it comes to illegal gambling in Queens County, all bets are off,” Brown said.