S. Jamaica’s 50 Cent made his name as rapper, actor

By The Greater Astoria Historical Society
0
comments
Posted on July 27, 2013 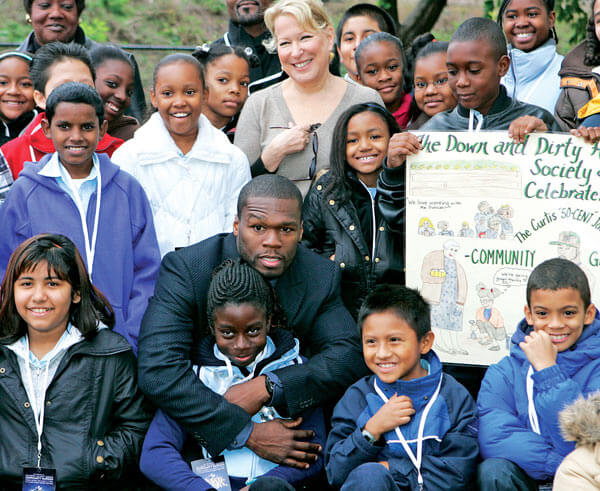 By The Greater Astoria Historical Society

During an almost 20-year career as a recording artist in rap music, Curtis Jackson III, a native of South Jamaica, has been better known by his stage name: 50 Cent.

Born July 6, 1975, to a single mother, Jackson’s formative years were largely shaped by the crack epidemic of 1980s. His mother, Sabrina, died of a drug overdose when he was 8 and he was left to the care of his grandparents.

Years later, Jackson described that tumultuous time in his life: “My grandmother told me, ‘Your mother’s not coming home. She’s not gonna come back to pick you up. You’re gonna stay with us now.’ That’s when I started adjusting to the streets a little bit.”

This adjustment included a dedication to boxing and, by the age of 12, dealing cocaine in his neighborhood. Arrested at 16 for weapons possession, a boot camp turned him away from selling drugs and Jackson adopted the name 50 Cent as a metaphor for the “change” in his life.

Jam Master Jay, from the breakthrough rap group Run-DMC, met 50 Cent in 1996 and began mentoring him. Jay produced a debut album for 50, but it was never released. Jay’s connections in the music business were invaluable, however, and he was soon working with other groups.

In May 2000, he was scheduled to film a video for the single “Thug Love,” a collaboration with rising pop super group Destiny’s Child. On the May 24, he was attacked in the yard of his grandmother’s house and was shot nine times in an attempted robbery. He spent 13 days in the hospital recovering from his extensive wounds.

The singles from that album — “In da Club,” “Disco Inferno” and “How We Do” — set a Billboard record for the first solo artist to have three songs in the Top 5 in the same week. His fourth album, “Before I Self-Destruct,” was released in 2008 and his fifth, “Street King Immortal,” is due to be released sometime in 2013.

Beyond his phenomenal success in music, 50 Cent has branched out into several business ventures, movies and television. His initial investment in Glaceau Vitamin Water netted him more than $100 million when it was sold to Coca-Cola in 2007. In addition, his line of SMS headphones has been popular among audiophiles. Appearances in films have followed with such titles as “Streets of Blood,” “Caught in the Crossfire,” and “Vengeance.” There have also been TV appearances on “The Simpsons,” “Entourage” and “Robot Chicken.”

“Fitty” is an example of a tough kid from the neighborhood who turned his life around through music.

Concerning his fame, he remains somewhat philosophical: “I don’t think it makes me a role model. I think it makes me inspiring. ’Cause I’m from the bottom, I think they look at me and go, ‘Well, if he made it, I can make it.’”