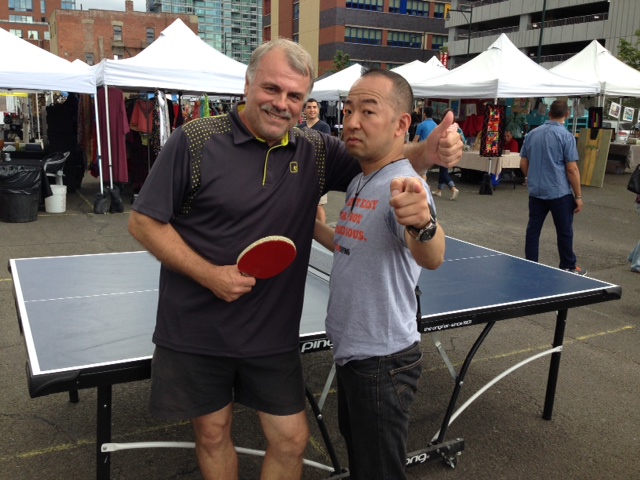 Just days before the US Open kicked off, the competition was in full swing at the LIC Flea & Food.

Many contestants competed throughout the day and the overall winner was Japanese high-ranking table tennis player Kazuyuki Yokoyama, who also goes by Kaz. The runner-up of the tournament was Wolfgang Busch, who co-founded the Pink Pong Foundation New York Chapter in 2002 in Brooklyn to promote table tennis, fitness and health in the LGBT community.

The winners were given Flea Bucks to use at the market and also took home bragging rights.

LIC Flea & Food is open every Saturday from 10 a.m. to 6 p.m. and will be back on Sundays starting the following weekend and run through the end of October.This Sunday, Aug. 31, in Astoria, the Astoria Flea & Food at Kaufman Astoria Studios will be celebrating its final day of the summer at the outdoor backlot of Kaufman Astoria Studios at 36th Street and 35th Avenue.

Visitors to the Astoria Flea will enjoy a beach theme Sunday with kiddie pools and games spread throughout the market.

Since May, the flea market has offered the best in food, drinks, antiques, clothing, art, accessories and much more. Initially the Astoria Flea was expected to run for only eight consecutive Sundays.

The market will be open this Sunday from 10 a.m. to 6 p.m.For more information visit www.licflea.com.