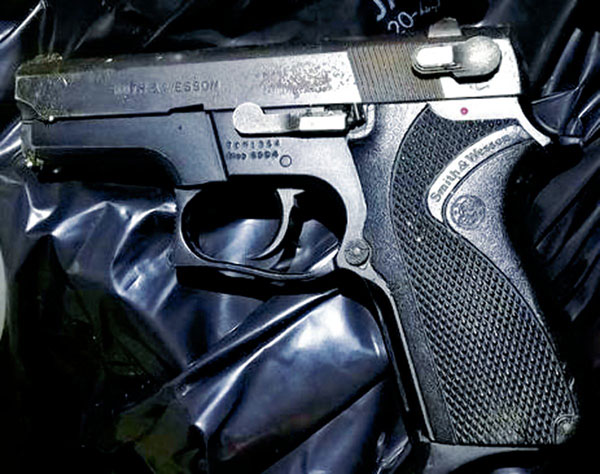 This loaded 9mm firearm was recovered at the scene of a shooting in the Baisley Housing Development in Jamaica.
Courtsesy NYPD

Police have charged a Pomonok man with aiming a gun at police officers, according to the NYPD.

On Oct. 29, a plainclothes lieutenant and officer assigned to NYPD Housing Bureau Police Service Area 9 were patrolling inside a building at the Baisley Housing Development at 116-80 Guy R. Brewer Blvd. in Jamaica, police said.

The two officers exited a second floor stairwell to find Jamel Ethridge, 38, allegedly with a gun in his hand, according to the NYPD.

The two officers fired, striking Ethridge one time in the left leg. He was transported to Jamaica Hospital and is listed in stable condition, according to police. The NYPD said they recovered a loaded 9mm firearm at the scene, and noted the two officers were also transported to a local hospital for evaluation.

Ethridge was later charged with attempted murder, criminal possession of a weapon, reckless endangerment and menacing. Police said the investigation would continue under the auspices of the Force Investigation Division, which was created to investigate police-involved shootings. The NYPD also released a photo of the weapon they said they recovered at the scene.