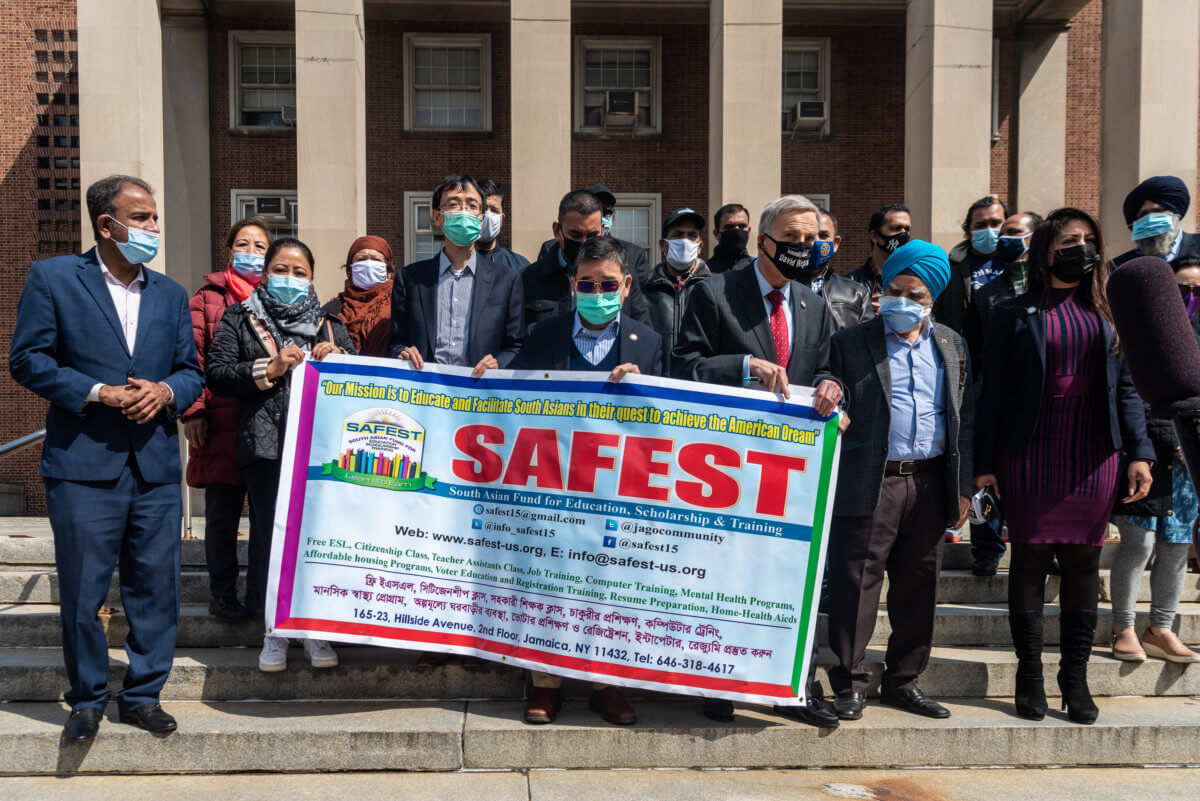 Several Queens elected officials and community leaders rallied outside of Queens Borough Hall on Friday, March 26, to condemn the alarming rise in anti-Asian hate crimes in New York City and across the United States following the vicious attack of a Lyft driver on the Van Wyck Expressway on March 16.

Assemblyman David Weprin opened the press conference, speaking about how Queens is the most diverse borough in New York City, with over 200 countries represented in his district alone. He then spoke about how Lyft driver Ashish Sapkota was assaulted by two passengers in the back of his vehicle.

Sapkota, who immigrated to the U.S. from Nepal five years ago, had only been driving for the rideshare company for a month when he picked up a couple at 59th Avenue around 7:30 p.m. on March 16, with a final destination of Jamaica.

Speaking during the March 26 rally, Sapkota recounted that the couple began fighting shortly after entering his cab. When the male passenger began beating his female companion, Sapkota pulled over on the side of the Van Wyck Expressway, trying to call 911 because he was afraid for the woman’s life. The male passenger punched Sapkota several times and snatched Sapkota’s phone. Stunned, he drove the couple to their final destination in Jamaica.

“If that guy had had a gun, my life would have been gone, you know,” Sapkota said, who added that he has been suffering from nightmares since the incidents and still can’t hear in his right ear.

So far, the NYPD is not treating the case as a hate crime but said that the motive was a robbery because of the cellphone the perpetrator snatched from the victim when he tried to call 911. Weprin noted that he personally would look into this and contact the NYPD.

“We are highlighting a particular hate incident that occurred not too long ago in my assembly district,” Weprin said. “Lyft driver Ashish Sapkota was the victim of a cruel crime, which sent him to Jamaica Hospital. Mr. Sapkota is a hard-working member of our community. No Taxi and Limousine Commission driver should have to live in fear that the next person who enters their car might attack them. What happened to Mr. Sapkota is not an isolated incident.”

“You know, there are so many incidents that are clearly hate crimes,” Weprin added. “People that look different than other people, especially here in Queens, are often targets, so we’d like them to fully investigate it as potential hate,” Weprin said.

Councilman Peter Koo condemned the heinous attack on another member of their community.

“New York City is a city of immigrants where everyone of every race, color and creed should feel welcome and unafraid to do their job,” Koo said.

Deputy Borough President Rhonda Binda shared that she was heartbroken and expressed that everyone was “sick and tired” of getting together having to condemn hate crimes against the AAPI community. Referring to the attack on Sapkota, she said, the incident is “an alarming reminder that our Asian communities remain under attack.”

Binda also announced that the Queens borough president’s office would introduce several initiatives in the coming weeks to equip communities against acts of hate and educate individuals.

“But what I’m asking of everyone here is to please record. When you see something, say something, use your voice,” Binda urged.

Assemblywoman Jenifer Rajkumar, the first South Asian woman elected to a government office in New York state, said she is appalled by the rise in hate crimes against the AAPI community across the country and demanded an end to the violence by investing in mental health and education.

“All kids must understand the history of discrimination in this country. We have to understand — in the late 1800s, United States Congress had actually passed a Chinese Exclusion Act. And there were great people that stood up against it,” Rajkumar said. “In 1923, the Supreme Court ruled that Indians were not white and cannot be U.S. citizens. We have overcome this discrimination. But we must learn about it, so you know where we’ve been and where we have to go.”

A GoFundMe page has been set up on Sapkota, who supports his wife and 5-year-old son who still live in Nepal.