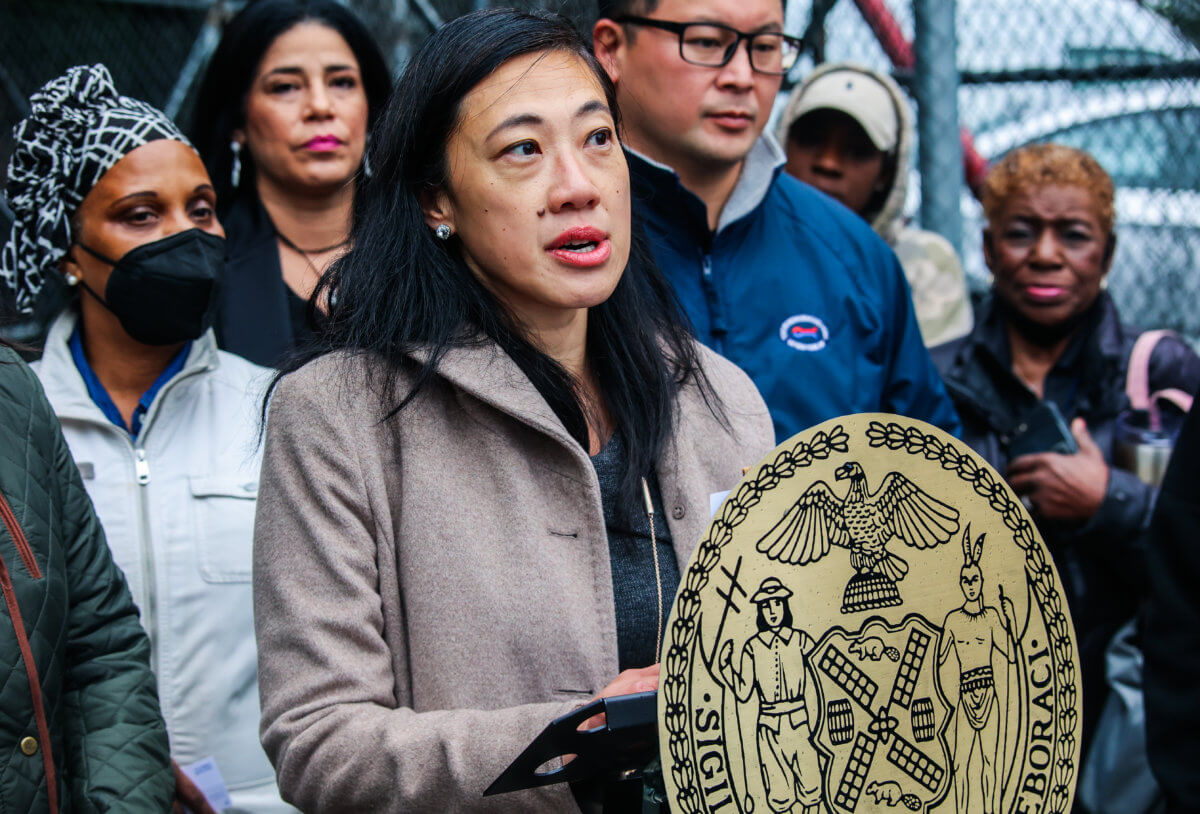 Councilwoman Sandra Ung speaks at a press conference outside of Flushing’s Bland Houses on Tuesday, Oct. 4, calling on NYCHA to restore gas service for residents. (Photo by Adrian Childress)

Several Queens lawmakers joined residents of Bland Houses in Flushing on Tuesday, Oct. 4, calling on the New York City Housing Authority (NYCHA) to expedite gas service, after residents in one building have been without gas for the past five months due to a leak in the main line.

“NYCHA, why are you dragging your feet? Let’s have transparency. What are we waiting for?” Marachlian said. “Thanksgiving is right around the corner, and I already know we are not going to have gas. I said I would work with NYCHA, but this is not working with our residents. We need our gas back on.”

According to residents, they have been forced to rely on hot plates and crockpots for all of their cooking needs since the gas shutdown in May.

“The hot plates are no good — it only lasts about a week and you can’t cook a real meal on ‘em,” a resident said. “Give us the gas and stop playing games. That’s it, simple.”

Another resident said she is prepared to file a class action lawsuit against NYCHA since the situation has affected her aunt’s quality of life.

“NYCHA, we expect you to restore the gas. Get a vendor, get the scope of work and time table. So, no gas, no rent,” the resident said.

Two years ago, local elected officials were urging NYCHA to restore gas service at the building, after several tenants had no service for months, according to Meng.

“This lack of gas service is unacceptable and needs to be fixed immediately,” Meng said. “The hard-working, rent-paying residents of the Bland Houses should not be forced to endure this problem for all these months. Having working gas in their apartments is essential, and they deserve better. It is unbelievable that the problem is occurring yet again. There must be no further delays. Gas service needs to be restored at once.”

According to Ung, her office has heard directly from residents with elderly parents who have dietary needs that are going unmet and affecting their health because they can’t fully cook in their own homes.

“NYCHA needs to be honest with residents, offer solutions, and release a timeline for the immediate restoration of gas service,” Ung said.

After months of inadequate solutions, Liu said the residents of Bland Houses deserve an upfront accounting and timetable for when they can expect the restoration of their gas.

“It is unacceptable for anyone to live without this basic housing necessity for this long, and we’re calling on NYCHA to get its act together and immediately expedite these repairs,” Liu said.

In a statement to QNS, a NYCHA spokesperson said “gas service interruptions and restoration work are a matter of public safety, involving multiple partners and steps, including shutting off the gas service and making the necessary repairs and inspections.”

“This outage at Bland Houses was due to a leak found off the main line into the building, and a broken stack in the basement that caused sewage flooding conditions needed to be repaired before the asbestos work could commence,” the NYCHA spokesperson said. “Asbestos work was completed in the beginning of September and we are in the permitting phase of restoration prior to construction. We have been keeping residents informed of the restoration timeline through weekly meetings and have distributed hot plates and slow cookers to residents.”

According to NYCHA, the gas service interruption is affecting 80 apartments at Bland Houses and restoration work will cost approximately $500,000.

The gas service interruptions affect cooking gas only and are unrelated to heat or hot water service, according to NYCHA. Additionally, NYCHA said that there is a small daycare center on the site, and that the agency is looking at relocation options for this program.

Meanwhile, residents at NYCHA Woodside Houses have been living without regular heat and hot water since August 2021.

Councilwoman Julie Won and Assemblywoman Jessica González-Rojas will hold a press conference on Wednesday, Oct. 5, at Woodside Houses demanding that NYCHA permanently restore the heat and hot water to the 2,900 residents at the building following reports of an unplanned outage.