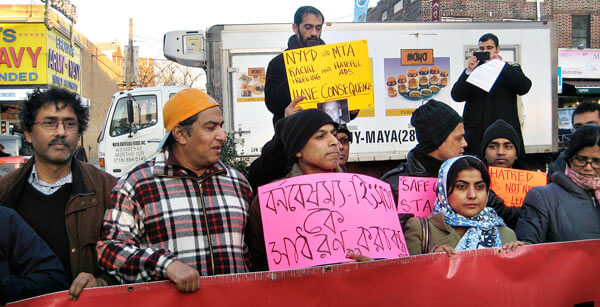 Members of the South Asian community and their allies gathered at the Jackson Heights pedestrian plaza Tuesday to mourn the murder of an Elmhurst man who was pushed in front of the No. 7 train last month allegedly by a woman who told police she hated Hindus and Muslims.

Participants in the rally, held at 37th Road and 74th Street, also implored the NYPD and Metropolitan Transportation Authority to do more to fight against Islamophobia.

“No one should have to lose a loved one, a friend, a family member in this way,” said Fahd Amed, of Desis Rising Up and Moving, a Jackson Heights-based advocacy group for South Asians.

DRUM held the rally with the Council on American-Islamic Relations-New York, members of other faiths and elected officials. The event focused on Rego Park resident Erika Mendez, who is Hispanic, and has been charged with murder as a hate crime after allegedly pushing Indian Hindu immigrant Sunando Sen in front of the eastbound No. 7 train at the 40th Street-Lowery Street station in Sunnyside last month.

After being arrested, Menendez allegedly told detectives that she pushed Sen “because I hate Hindus and Muslims ever since 2001 when they put down the Twin Towers …. I’ve been beating them up,” the Queens district attorney’s office said.

Muneer Awad, of CAIR-NY, said he believed the attack and many other hate crimes against Muslims and those who resemble Muslims, such as Hindus and Sikhs, have been encouraged by city policies. He criticized the NYPD’s monitoring of mosques, hookah bars and Muslim groups inside and outside the city and the MTA allowing an anti-Islam group to buy ads on the subway.

“These isolated incidents must not happen in a vacuum,” Awad said about the attacks on South Asian and Middle Eastern immigrants.

The NYPD did not respond to a request for comment.

MTA spokesman Kevin Ortiz said the MTA posts a disclaimer on the subway ad stating that the agency does not endorse the views of the advertisements.

“We do not decide whether to accept or reject a proposed ad based on the viewpoint that it expresses or because the ad might be controversial,” Ortiz said.

Ranjit de Roy, a friend of Sen and DRUM member, said Sen was a good person and that the attack was frightening.

“I am very much scared,” Roy said. “I think everyone’s feeling like this.”

Openly gay City Councilmen Daniel Dromm (D-Jackson Heights) and Jimmy Van Bramer (D-Sunnyside), whose district includes the subway stop where Sen was killed, both spoke of the importance of speaking out when any hate crime occurs. Dromm compared what happened to Sen to the 1990 murder of gay Jackson Heights resident Julio Rivera, which galvanized the LGBT community in the neighborhood.

“Whether he lived here or not, he was our neighbor, too,” Van Bramer said. “He was worthy of our love and respect.”