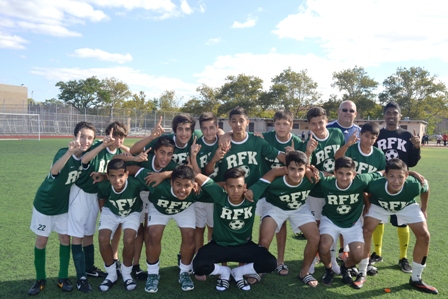 As a mid-fielder he should be defense minded and looking for opportunities to steal and advance the ball. But a natural striker, in the first half of the September 22 matchup at Francis Lewis High School in Queens Division B soccer, Hassan kept falling in front looking to score instead of pass. He was so hungry that by the start of the second half RFK head coach Ed Ryder decided to place him at the forward position.

“He’s like a bug in the porch light,” Ryder said. “He just wants to go to the goal. So we’re like ‘let’s swap him with one of the guys up top.’”

And Hassan felt right at home after the switch, as he scored two goals to lead the RFK Panthers to upset the undefeated August Martin High School Falcons, 3-1. Hassan’s second goal, which came with 20 minutes remaining in the game, capped the win. He snuck into the box behind defenders and waited for a pass, then, undefended, he carefully placed the ball past August Martin goalie Mark Tyndale.

“When I got the pass I was like ‘oh this is my chance to shine,’” Hassan said.
Before Hassan’s light shone though, the match was a classic David versus Goliath bout, and Goliath was pounding away.

August Martin (4-1), which entered the game after a 5-0 drudging of Springfield Gardens High School, controlled possession in the first half with hounding defense and aggressive shot taking. It was slightly unorganized, and occasionally earned players a yellow card or warnings, but it was effective.

In the 27th minute, Falcons forward Timothy Frank scored the game’s first goal after beating a defender on the right flank, and blasting a shot from about 15 yards away. RFK (2-2) goalie Michael Singh initially blocked the shot, but the force sent him to the ground and the ball trickled into the goal.

The turning point for the Panthers came in the 45th minute when senior Karimullah Mashriqi tore through a few Falcons defenders on the left sideline and was geared to shoot in the box, but was tripped hard. RFK earned a major penalty kick, which senior Firoze Mehirdel easily buried in the back of the net to tie the match, 1-1.

A few minutes later Hassan came up with his first goal and RFK, the underdogs, took a 2-1 led, shocking August Martin.

“It took the wind out of their sails,” said Falcons coach Dominick Stanco. “They got very complacent and the team just started to give up.”

Hassan’s second goal in the 60th minute completed the biggest win for the RFK program in school history, since the team was just created two years ago.

“We beat Townsend Harris last year as a developmental team, that was the biggest win in the history of the program,” Ryder said. “This one is going to live on for a while.”