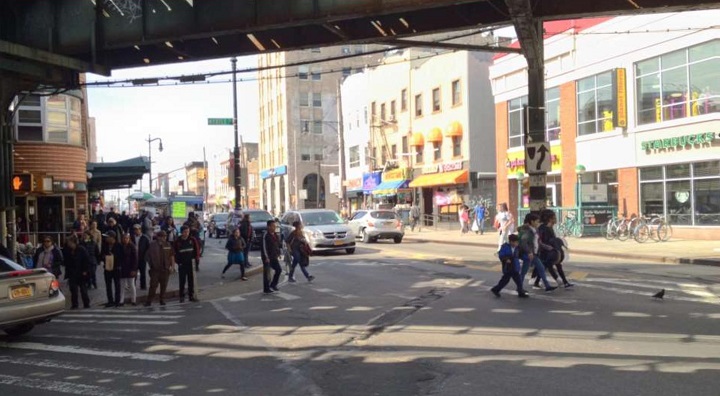 After hearing heart-wrenching testimonials from families who have lost loved ones at the intersection of Myrtle and Wyckoff avenues, Community Board 5 (CB 5) voted in favor of the Department of Transportation’s (DOT) pedestrian plaza plan.

Judy Kottick, mother of Ella Bandes, who was 23 years old when she died after a bus struck her at the intersection at the Ridgewood/Bushwick border on Jan. 31, 2013, pleaded with the members of CB 5 to support the DOT’s redesign at the intersection where her daughter lost her life, during CB 5’s monthly meeting on Wednesday, July 13, in Middle Village.

“Losing a beloved child is the nightmare you would image it to be and I wake up every day questioning why this happened to our family and how it’s possible to go on,” Kottick said. “It is in [Ella’s] honor, and the other two people who were killed at the intersection, and all of those injured, that my husband, son and I are asking you to please support the DOT’s redesign of Myrtle-Wyckoff.”

“I am here tonight to remind everyone that behind every number there is a person,” Cohen said, fighting back tears. “Failure to fix this intersection will mean more people will be killed. It is listed as one of New York City’s most dangerous crossroads. Please, we urge you to transform it into one of the safest. I urge you for Sammy, and for Ella, do not let another parent pay such a high price for New York City’s inaction.”

CB 5 recommended approval of the plaza plan almost unanimously, with 31 of 32 members voting in favor. The lone holdout came from Ted Renz, the executive director of the Myrtle Avenue Business Improvement District (BID), who abstained from voting because the BID may become a partner of the plaza.

The plan will close off Wyckoff Avenue between Gates and Myrtle avenues, as well as turn Wyckoff Avenue, between Myrtle Avenue and Madison Street, into a one-way southbound street. These changes are expected to make the intersection much safer by eliminating the number of turns vehicles can make and providing safe passage for commuters traveling from the intersection’s two transportation hubs: the M train station and the bus layover station.

DOT is now aiming to get Community Board 4 Brooklyn, which services Bushwick, where the intersection is also located, on board with the plan. Implementation of the plaza is expected to begin in late summer.