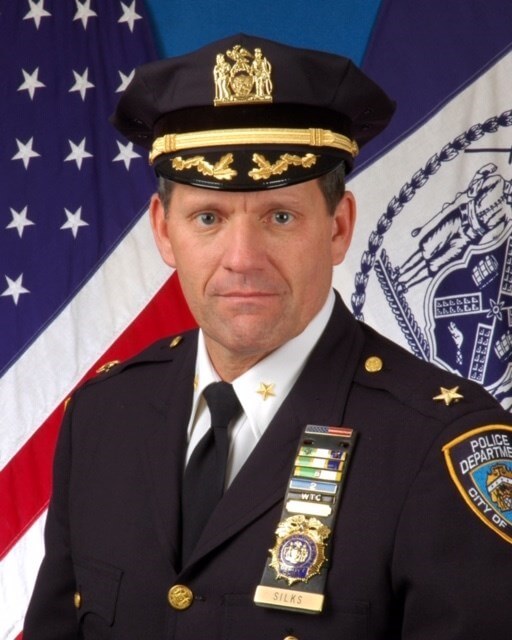 Services were held Tuesday at The Reform Temple of Forest Hills to honor NYPD Deputy Chief Steven Silks, the 62-year-old deputy chief of Patrol Borough Queens North, who was found dead of an apparent self-inflicted gunshot wound in Forest Hills on June 5, one month before his mandatory retirement.

“He lived for the NYPD, he had such enthusiasm for the job and for life itself, which makes this difficult to understand,” said NYPD Detectives Endowment President Michael Paladino, his friend of 35 years. “He was one of the nicest human beings I have ever met.”

“When he came to Queens North which is headquartered at the precinct he immediately adopted the council and we were lucky to have him,” Chain recalled following Silks’ well-attended funeral which she called moving and touching. “He was a very caring man. A charming and very intelligent man who loved the NYPD.”

Silks began his illustrious 39-year career in September 1980 and rose steadily through the ranks until he was promoted to Deputy Chief in December 2006. Silks was also second in command at the Police Academy where he was responsible for heavy weapons training in the wake of the Sept. 11 attacks.

He was an avid biker who once rode coast to coast, he climbed Mount Everest and worked on a NASCAR pit crew. Silks was a gun collector, hunter, rower, a member of the Rockaway Polar Bear Club and an aficionado of fine cuisine. He was awarded the Ellis Island Medal of Freedom and the NYPD Holy Name Society Man of the Year Awards.

“He was a dedicated lifelong public servant, an avid outdoorsman, a marathoner, a mountain climber and most importantly, he was a friend,” Police Commissioner James O’Neill said at an unrelated press conference. “Steve truly was one of the most capable and most dependable cops this job has ever seen, his entire career, much of his adult life in fact, was devoted to New York City, to its police officers and to fighting crime and to protecting all the people we serve. He wanted to make our great city a better place for all. And he certainly did that every day.”

Several commanding officers declined to comment, but Deputy Inspector Ron Leyson, the former commander of the 110th Precinct, in Corona took to Twitter.

“I consider Chief Silks not just my boss but a mentor and a friend,” Leyson wrote. “I cherish the many conversations, stories and laughs we shared over the years. He embodied what a leader is, always looking out for his troops and the best interests of the NYPD and the city he proudly served.”

Silks grew up in the Bronx as an avid Yankee fan, but he became a supporter of the Mets during his tenure working in Queens, which included security operations with Leyson during home games at Citi Field.

Leyson called it “one of the Chief’s favorite places”; the Mets held a pregame dedication and moment of silence at Citi Field the day after Silks’ death.

Silks was not married and did not have children, and he was survived by his sister Cindy, his brother John and many nieces and nephews.

Following his funeral service, NYPD officers were invited to meet his family during a celebration of Silks’ life at the West Side Tennis Club, not far from where his body was discovered in his unmarked car in the shadow of Forest Hills Stadium.