By Carlotta Mohamed Posted on September 2, 2021 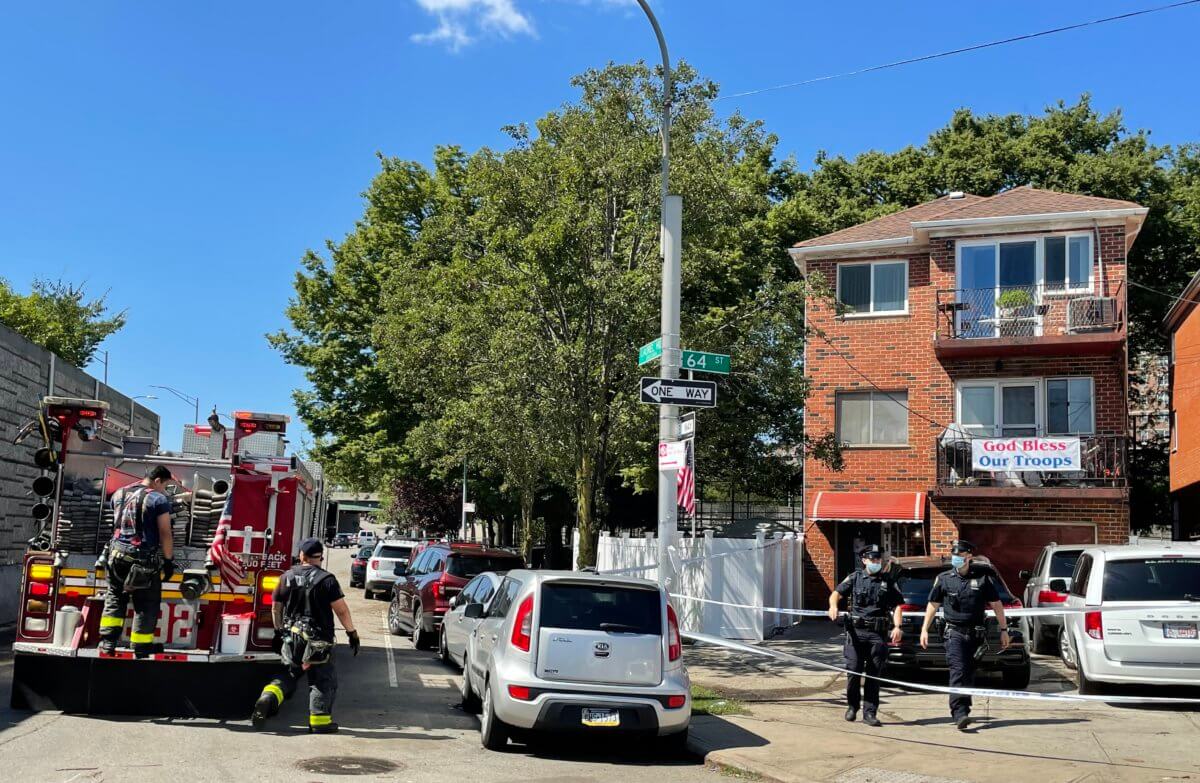 FDNY firefighters and NYPD officers arrive at the Woodside residence located at 44-60 64th St. where a family of three were found dead in their basement apartment. (Photo by Carlotta Mohamed)

Woodside residents on 64th Street were devastated to learn that a family of three was found dead in the basement of their home Wednesday night, as remnants of Hurricane Ida pummeled the city with heavy rainfall and severe flooding, quickly filling basement apartments in the area.

Officers from the 108th Precinct responded to a call regarding a flooding condition at the home located on 64th Street near Laurel Hill Boulevard. Upon arrival at the scene at around 10 p.m., authorities discovered 2-year-old Lobsang Lama, his 50-year-old father, Ang Lama, and 48-year-old mother, Mingma Sherpa, who were found unconscious.

The family was pronounced dead.

The city’s medical examiner is investigating the causes of death and the investigation is ongoing, according to authorities.

As residents along the block were cleaning their homes and were trying to fix their disabled cars, firefighters and police officers were at the scene assessing the damage.

News of the family’s death left Martha Suarez shaken and heartbroken, as she stood across the street from their residence. According to Suarez, the family was from Nepal and had lived in the basement apartment for about five years.

“Is the baby in there? Are you sure about that, he’s in there? What about the parents … I was coming to see them!” Suarez said, as tears streamed down her face. “All of them died? I can’t believe that…”

According to Suarez, who is a teacher, she was working with the child, whom she says was autistic. She was on her way to visit the family, as she has been doing so for the past week, she said. However, when she didn’t receive a phone call from them, she decided to go to the house.

“The baby was so cute. He was a happy boy. I was working with him on his language skills — he was in need of the services,” said Suarez, who works for Momentum Interventions, a public program for infants and toddlers with special needs.

Samsul Chowdhury, who lives three houses down from the family’s residence, said they were quiet people.

“They used to walk by but none of the owners knew them. I saw them a couple of times. Tenants come and go, some talk and some don’t,” Chowdhury said. “It’s devastating, though, what happened … I feel for them.”

Chowdhury, who has lived on the block for 10 years, says he has “never seen anything like this before.”

“I couldn’t sleep last night. I wanted to make sure my tenant and neighbors were okay,” said Chowdhury, whose basement is flooded with water. “The water was up to my waist level — it was that high.”

According to Chowdhury, his tenant, who has been living in the basement for one year, slept upstairs in his apartment. Almost 80% of his tenant’s belongings are damaged, he said.

“My tenant is doing fine and we are fixing up the apartment. The water is gone,” Chowdhury said. “Thank god everyone is safe but the city should help us.”

Councilman Jimmy Van Bramer, who visited the site to assess the damages and lend support to his constituents impacted by the storm, said “the death of one child is one too many.”

“Unfortunately, the authorities were not able to reach them in time and save their lives. Everyone is devastated that a child died and a family was killed on this block,” Van Bramer said. “The water here was incredibly high in this particular location.”

According to Van Bramer, the basement in all of the homes on the block were flooded significantly.

“Many of these basement apartments are occupied and lived in, and people have nowhere to sleep,” Van Bramer said. “We are in touch with the mayor’s office and will start discussions for my constituents to receive assistance, file claims and rebuild.”

As western Queens — which includes the neighborhoods of Sunnyside, Astoria, Long Island City and Woodside — and other parts of the borough experienced severe flooding, Van Bramer said the city and federal government needs to address the climate crisis in order to prevent escalating storms that he says are “dangerous and devastating.”

“We need to modernize infrastructure. This was an unprecedented amount of rain in a very short amount of time. Obviously, our sewer system is just overtaxed and needs to be modernized and updated,” Van Bramer said.

The councilman noted the adoption of the Green New Deal, a policy proposal with broad goals to cut carbon emissions across the U.S. economy. It also tackles transportation, electricity production and agriculture, while aiming to create new jobs to boost the economy.