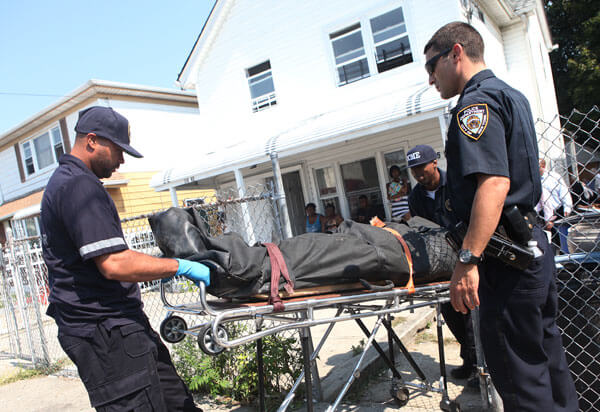 An elderly furniture designer died in a South Jamaica blaze early Tuesday morning, his neighbors and a woman who worked with him said.

Charles Pollock, 83, who thought up the Pollock Executive Chair, was killed after a fire broke out in the four-family home, on 157th Street near 115th Avenue, where he has lived for the past year, according to fellow residents.

Constance Smith, who said she had worked with Pollock, described it as possibly the best selling chair of all time.

“It’s a great shock,” Smith said, after wiping away tears.

A spokeswoman for the Fire Department confirmed that an unidentified person was killed in the blaze and two firefighters suffered minor injuries.

“He basically talks about his char, how you design them,” said 20-year-old Naomi Ebouki whose family lived below Pollock in the basement.

“That banging was coming from Charles, maybe asking for help,” Kayulu said, explaining that as she and her two children evacuated, she asked her daughter to check on Pollock, who used a walker.

Ebouki then used a key to open the door to the senior’s apartment and was met with a wall of smoke.

“I saw black smoke and a fire up to here,” she said, pointing to about a foot and a half off the ground.

The family feared the worst and headed outside to wait for emergency responders.

Ebouki said her neighbor often sat in front of the home’s gate, waiting for an Access-a-Ride bus to arrive, and encouraged her to pursue her dream of becoming a singer by playing jazz classics like those sung by Ella Fitzgerald.

“I was surprised. This man is famous. I said to myself, ‘What is he doing here?’ He is supposed to be in a better place,” said Ebouki.