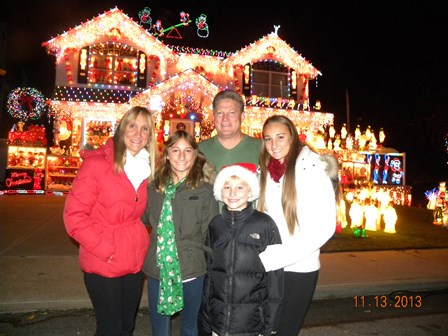 A Whitestone family competing for the best Christmas lights display in the nation will find out Monday night if there is another reason to glow.

The Lynch family will be featured on ABC’s “The Great Christmas Light Fight” Dec. 9 at 9 p.m.

The new reality-competition series gives four families, vying for a $50,000 prize, 20 days to come up with the most elaborate Christmas decoration designs.

“For me to do this in three weeks was tough,” said Kevin Lynch, 55. “It’s like running a marathon.”

A blanket of at least 300,000 lights — all with underground wires, no cords — covers Lynch’s over-the-top decorated home. There is even a projected Santa Claus, waving out of the second-story window.

The father of three said he made putting up lights his life every day from 8 a.m. to 2 a.m. for three straight weeks.

“I lived on coffee and espresso. I didn’t even eat until 1 o’clock in the morning,” he said. “By 1 o’clock, I was dead. I couldn’t move. I’d pass out, take the kids to school, come back and do lights. And I got it done, which amazed me.”

But Lynch, a retired firefighter, will not know whether his lights shimmered or smoldered against the rest until a few hours before the show airs.

“It was a great experience,” he said. “It’s an honor in itself to be one of the 20 best houses in the country.”

Lynch has been lavishly decorating his home for 17 years. Even before filming the show, the Whitestone light site was a tourist destination and backdrop for wedding pictures, he said. It was even spotted in the skies by airplane pilots.

“People come here from all over and send us Christmas cards with our house in them. It gets crazy here, but it’s all in good faith, all in good fun,” Lynch said. “It’s part of the spirit.”

The houses will be judged on use of lights, overall design and Christmas spirit by Michael Moloney and Sabrina Soto of “Extreme Makeover: Home Edition.”

The series continues Dec. 16 and 23 with 16 more competing homes.

“It was very stressful, the whole time we were doing it,” said wife, Tina Lynch. “But it is exciting to see what will happen. It was worth it.”