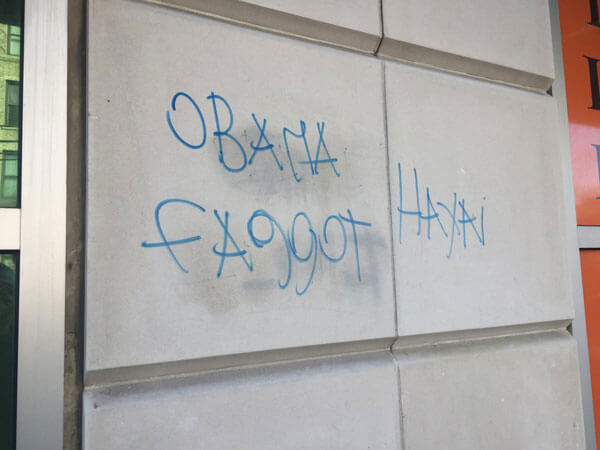 Hate graffiti is discovered on the outside wall of an office building where Astoria’s elected officials are headquartered on Newtown Avenue.
Courtesy Gianaris’ office

Hate graffiti was discovered scrawled on the wall outside the district offices of state Sen. Michael Gianaris (D-Astoria) and state Assemblywoman Aravella Simotas (D-Astoria) and at two other locations in Astoria Monday morning. The two, along with City Councilman Costa Constantinides (D-Astoria) have been vocal critics of the Trump administrations executive orders and have taken actions towards uniting the community after numerous anti-Muslim incidents since Election Day.

Police from the 114th Precinct have documented each incident and are examining security footage that might identify who is responsible. Simotas introduced legislation two weeks ago that would protect undocumented immigrant crime victims.

“Writing hateful graffiti is a cowardly, criminal act that pollutes our neighborhood and makes people feel less safe,” Simotas (D-Astoria) said. “I am confident that the 114th Precinct will catch the perpetrator or perpetrators, whatever their sick motivation may be. These acts of hate will neither silence nor stop Astoria’s elected officials from working to fight discrimination and intolerance and to protect the beautiful diversity of our neighborhood.”

Gianaris has taken action against the Trump administration, including introducing legislation that would prohibit the Port Authority from using any of its resources in support of Trump’s executive order’s enforcement. Gianaris also introduced legislation that would add immigration status to the list of protected classes in the state’s Human Rights and Civil Right Laws and has fought federal efforts that would discriminate against people based on the ethnicity, religion, sexual orientation and gender.

“It is shameful that someone is trying to divide our diverse neighborhood through hostility and bigotry,” state Sen. Michael Gianaris (D-Astoria) said. “We can assure our community that these hateful actions will not silence our opposition towards policies we consider un-American, and we will continue to fight for those who need our help no matter what.”

Gianaris and Simotas both have offices at 31-19 Newtown Ave. Constantinides, who his headquartered next door at 31-09 Newtown Ave., has helped them organize a rally in support of the Muslim community in the Little Egypt section of Astoria as well as a community celebration of Astoria’s diversity.

“I strongly condemn this symbol of hate and vandalism in our community,” Constantinides said. “As we see hate crimes rise across they city, we stand together in support of respect and tolerance. We will continue to fight bigoted and despicable acts such as these. Thank you to the 114th Precinct for the hard work investigating these hate crimes.”