As a property owner tries to set plans for a controversial Bayside development in motion, members of the northeast Queens community are vowing to fight the project “tooth and nail.”

More than 100 residents gathered on July 20 for a rally outside of 214-10 15th Ave., where a developer is proposing to erect a four-story, mixed-use building with underground parking.  The demonstration was organized by the Bay Terrace Community Alliance (BTCA), who said the project raises safety and quality of life concerns.

“That would totally destroy the character of this neighborhood,” state Senator Tony Avella said of the plans. “The community has risen up to say, ‘No.'”

Data on the city Department of Building’s website indicates the application to construct the building was rejected on June 25 due to incomplete drawings. The Department of Environmental Protection also issued developers a Stop Work Order on July 12 after inspectors discovered work being performed at the site violated the New York City Air Pollution Control Code or Asbestos Rules.

The plot of land is located in an R5 zoning district, which allows for three- and four-story attached residences and small apartment houses with a height limit of 40 feet.

“We’re here to send a message to the developer: just because you can do something legally doesn’t mean it’s the right thing to do,” Assemblyman Ed Braunstein said. “A daycare center on this block is going to be a disaster.”

Avella said his office was able to contact the property owner, who claimed he was willing to meet with the senator about the community’s concerns. QNS could not reach the owner for comment.

“This is a nightmare waiting to happen,” Avella said. “We’re going to fight this tooth and nail.”

The proposed development has renewed the call to see a down-zoning in the Bay Terrace neighborhood. Braunstein and Councilman Paul Vallone have penned a letter to City Planning Commission chair Marisa Lago, asking the agency to conduct a rezoning study for the area.

“This is a united effort by every elected official that represents this neighborhood and the civics — well beyond the Bay Terrace community,” Avella said.

BTCA president Matthew Silverstein encouraged residents to contact the City Planning Commission and Department of Buildings with their concerns, and 311 with any job site complaints.

“We care very deeply about the character of our community,” BTCA president Matthew Silverstein said. “We must send a clear message that we are standing up and fighting for our community and will not allow this to go through.”

Residents at the rally distributed a petition against the development and in favor of a local rezoning. Dolores Kushel, who has lived in a co-op building in the area for over four decades, spoke in favor of the move. 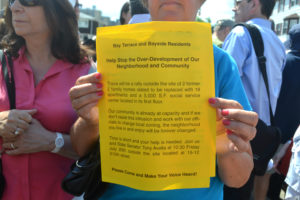