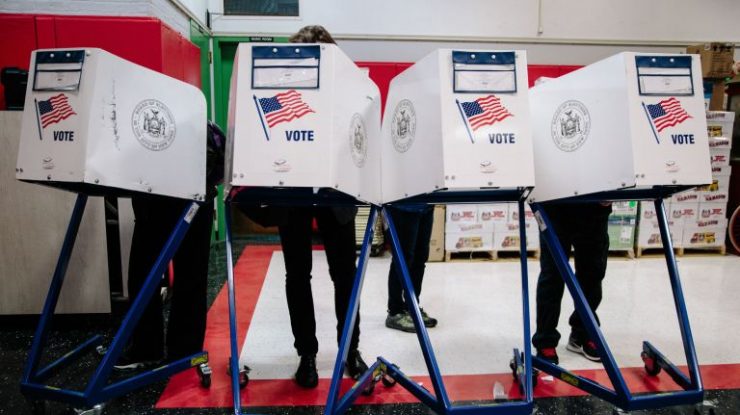 Two Queens legislators have joined a lawsuit aimed at stopping the use of ranked-choice voting in the Feb. 2 special election in northeast Queens.

City Council members Adrienne Adams and I. Daneek Miller have joined four other legislators — each members of the council’s Black, Latino and Asian Caucus — in a suit against the city, the city’s Board of Elections and Campaign Finance Board. The suit requests that ranked-choice voting – which is set to be implemented for the first time in New York City during the special election to fill Rory Lancman’s seat in District 24 in February – be paused and reassessed.

The complaint, filed in New York Supreme Court on Tuesday, Dec. 8, alleges the city has violated its charter in multiple ways by failing to adequately prepare for the rollout of ranked-choice voting.

According to the complaint, the city has failed to educate voters on the new electoral process, has not kept to a “timely” schedule in preparing new voting machines and has not done enough to ensure that all limited English proficient voters will have access to translators at polling sites.

“The physical and fiscal limitations placed on the city by the COVID-19 pandemic have severely hindered its ability to put ranked choice into effect without risking the disenfranchisement of our New Yorkers of color, seniors and limited English speakers,” the Black, Latino and Asian Caucus said in a statement Thursday. “The city cannot afford to risk failing to accurately count a single ballot cast by these voters because of a hasty and poorly assembled implementation of ranked-choice voting.”

Adams, the only Queens council member running for reelection in 2021 unopposed, said that introducing ranked-choice voting in the special election would be “irresponsible.”

“Preparations for implementation have been lackluster at best,” Adams said. “The outstanding logistical concerns surrounding a robust public education campaign decry the need to hit pause on ranked-choice voting to preserve equality for all voters.”

Supporters of ranked-choice voting — which saw broad support from voters as a ballot measure in 2019 — say that the lawsuit is unfounded and frivolous, and that the new system will give voice to those who have historically lacked representation in the halls of government.

“I understand [the complainants’] concern, but I think the money they are spending on this lawsuit, they could spend on educating the voters they say they’re concerned about,” said Moumita Ahmed, a candidate for City Council in February’s special election in District 24.

Supporters of ranked-choice voting — including Ahmed, who told QNS she’s excited to be a candidate in the city’s first run at the new process — believe the ballot system is more democratic and more fiscally responsible.

Under ranked-choice voting, voters rank five candidates in order. If a candidate is ranked as the first choice on over 50 percent of the ballots, they win. If no one passes the 50 percent threshold, the last-place candidate is eliminated and all the ballots where that candidate ranked first go to the candidate the voter ranked second. The process continues until a candidate reaches the majority.

“It’s more democratic because now we are looking at a candidate who has gotten the majority of the votes,” Ahmed said.

Not only do its supporters believe the system to be more democratic, eliminating ranked-choice voting now, they say, would be outright undemocratic.

“There was no conspiracy to pass RCV; there was an election,” said Susan Lerner, the executive director of Common Cause/NY, a nonprofit that advocated for the passage of ranked-choice voting in 2019. “The decision to put RCV on the ballot was not conducted in a backroom but in broad daylight by the Charter Review Commission — appointed by the City Council, among others — which held numerous public hearings over the course of months. Seeking to invalidate the results of a decisive, free and fair election is an attack on our democracy.”

When it comes to educating voters, Ahmed said that not trusting people to understand ranked-choice is a “little patronizing.”

“It’s saying that voters are too stupid to understand how it works,” Ahmed said. “It’s not that difficult.”

The Campaign Finance Board rejected the allegation that voter education has been lacking and that the city is not prepared for ranked-choice voting.

“The Campaign Finance Board is dedicated to helping New Yorkers fully participate in ranked-choice voting, which is designed to give all voters a bigger say in who gets elected to city office,” the board said in a statement. “We have been working on our ranked-choice voting educational efforts all year.”

According to Ahmed, the burden to educate voters should be nothing new to elected officials, who often have to explain new policy ideas to voters and keep voters informed about their work.