Bayside handball athletes score big on and off the court 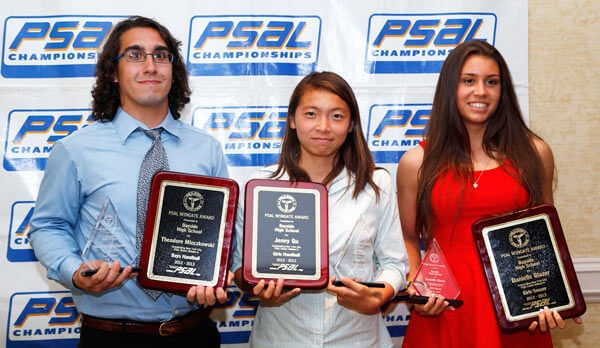 Bayside’s Jenny Qu and Theodore Mleczkowski are different people on the handball court.

The seniors have a more reserved, quiet demeanor outside competition, but during it they and their teammates made enough noise for both players to earn the PSAL’s Wingate Award, given to the top senior in each sport.

Commodores boys’ handball Coach Venoid Kublall said teachers in the school can’t believe Mleczkowski is one of his team’s top players because he isn’t vocal in the classroom. Qu was taken aback by winning the Wingate, not knowing what it was until days before receiving it. It left her reluctant to attend the dinner at the Brooklyn Marriott and speak in front of a ballroom full of people. She eventually relented, but kept it short and sweet. That’s not the same person Bayside girl’s handball Coach Ken Dyckman has watched play.

“Believe me, on the court she is not quiet at all,” he said. “She’s the best handball player I’ve been around in the last five years.”

The shyness is the opposite of the emotion she plays with. Qu is the league’s top player. She went undefeated this season and posted a career mark of 31-1 over the past three seasons.

Qu, also the league’s individual champion, led the Commodores to a PSAL city title after they lost in the finals the last two seasons. She had 55 aces in 12 matches, showing off her signature serve.

Qu won the clinching match of the team championship 21-12 against Midwood’s Olivia Kyi after falling behind 5-0. Dyckman thought about letting her play the match before, but was confident he had not let the title slip away in the big moment.

“I could have put her in the fourth match to tie it, but I know mentally she is so strong that I save her for last,” he said. “Once we got to her I knew we were going to win.”

Winning is all Mleczkowski has done during his career. He completed the rare feat of leading Bayside to back-to-back city titles, winning the invitational tournaments, individual title and taking home the Wingate Award all in the same year. Qu also matched his efforts on the girls’ side.

“It’s an amazing accomplishment for him,” Kublall said.

Mleczkowski, who began playing handball in sixth-grade and was undefeated in the playoffs and 9-2 overall with 59 aces and 20 kills in 12 matches. He won more than 40 matches in the four years at Bayside and his dominant 21-1 win over Francis Lewis’ Darren Chin clinched this season’s team title.

“We have a legacy that will never be forgotten for handball and it means a lot to us,” Mleczkowski, said.

That goes for the Commodores teams as well as their two stars, who have helped make it all possible. The two enjoyed their many successes together.

“We both won major tournaments and won a city title,” Mleczkowski said. “It means a lot. It’s special to do it with a girl I know from my school.”