‘Everything in there is gone’: Queens homes ruined by massive sewage spill 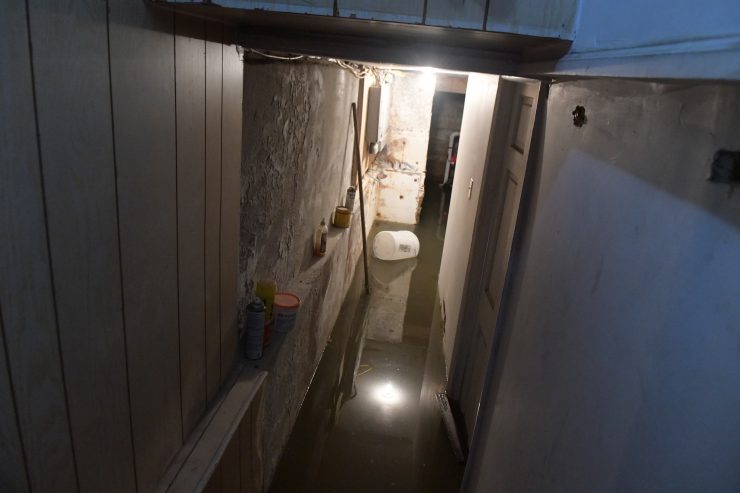 Raw sewage flowed into more than 80 homes in South Jamaica on Saturday and was still flowing on Sunday from a sewage pipe that is more than 40 feet under the foot of an overpass at 150th Street near the Belt Parkway.

Crews continue to investigate and cleanup a massive sewer backup in South Jamaica this weekend in which more than 80 homes were flooded with raw sewage.

Officials from the Department of Environmental Protection said on Sunday that the mess was the result of a clogged or collapsed sewer main.

The sewage filled basements of homes in the area of Inwood Street and several blocks surrounding that community. The homeowners woke up Saturday morning to find up to four feet of putrid black sewage in their cellars, covering personal property, walls and floors, and destroying heating and electrical devices.

Many of the homes were rendered uninhabitable, and the stench caused many to feel sick.

Police closed the 150th Street overpass, where contractors were on the scene cutting through asphalt to get to what they say was possibly a 20 inch sewer main up to 40 feet under the ground. Workers say they did not know where the main was clogged or “more likely collapsed.”

DEP officials reported that an army of workers were on scene around the clock from Saturday, pumping out basements and trying to clear the sewer blockage on the south side of the Belt Parkway at 150th Street.

Officials say they used vacuum trucks and high pressure water to break through the blockage, but without success. The goal, officials say, was to create a bypass of the blocked main so that the sewage can travel up to the Jamaica Wastewater Treatment Plant.

One of the impacted homeowners, Rashad Mubarack, said the sewage ruined the house he just purchased.

“I closed on this house on the 26th, got the keys on Friday and then at 3 a.m. the next day, we find out there is three feet of sewage in the basement – everything in there is completely gone,” said Mubarack as he and another man loaded damaged property into a dumpster, which was initially rented for kitchen renovations.

“We were supposed to move in, but now the boiler, the hot water heater – it’s all contaminated,” Mubarack sighed.

Jaswinder Singh said his home was just renovated after he bought the house six months ago.

“My neighbor came knocking at 5-6 a.m. and he said he has a of water in his basement so we went downstairs and then ‘oh my God,’” Singh said as he watched a pump spewing water into the street.

Singh said he made his own attempts to pump out the sewage without success.

“It was all new, the water heater, the furnace, everything,” Singh said. “We tried pumping it and so did the city and it just kept coming back. Everything in there is gone.”

Janice Harmon, a research nurse said they detected a “faint smell” but didn’t notice the sewage until 2 a.m. Saturday morning, when they started calling the city.

After the water was more than a foot high, the furnace began smoking and the water heater alarm blared, prompting Harmon to call the Fire Department. Con Ed and National Grid also showed to make sure there wasn’t a hazard.

By the time DEP arrived at 6:30 p.m. Saturday night, she said, her basement was destroyed and “you couldn’t stay in here because of the terrible smell.” She and her husband wound up sleeping in their car because they couldn’t leave the house unlocked for DEP to continue pumping.

“They gave us a bucket and a mop head — but we are not going down there because you need a hazmat suit and masks — it is clearly a health hazard and I would know,” said Harmon, adding, “Where will we go? Somebody needs to come help us.”

The Red Cross set up a reception center at P.S. 223 on Sutphin Boulevard nearby to provide temporary shelter for residents flooded out by the sewage. Desiree Reiner, spokesperson for the Red Cross said they had established this center to provide “a safe, warm place for residents.”

“We are providing case workers to help residents file claims on damage and we will shelter up to 100 people if needed,” Reiner said. “We are working with the city to find a new shelter to house anyone else who needs it, but we are still working on it.”

Pat Dyer, president of the 149th Street Civic Association, was organizing efforts to help residents and provide information at the Marriott Hotel across from the stinky sewage situation.

“We are letting people know about the meeting – they need to know what is the next steps, how we can get peoples houses cleaned up,” Dyer said. “We are out here making calls and trying to get people info.”

Dyer said they are concerned that people will get sick from the sewage and in one case, “one neighbor said worms were coming out of her tub drain.”

“With a winter storm coming and school reopening tomorrow, we want to get people the help they need,” Dyer said.

Some people took it upon themselves to pump out and clean up.

Christian Perez, a 13-year resident of 133rd Avenue off Inwood Street, said he realized water was coming into the house on Friday night, and put his own pumps to work.

“I had to buy two more pumps and nothing was working until I was able to clog up the drains with towels,” said Perez as he piled damaged furniture and property onto this front lawn. “There was nothing I could do to stop it.”